Creating and building effective teams has got to be the biggest challenge facing business owners. I am yet to find a business that is successful without getting this “people” stuff sorted.  I recently  found a great model for describing how team dynamics work.

I had previously been aware of the work of the Grove guys from their work with “visual meetings” (good book btw),  but I was unaware of the fact that in the 1980’s David Sibbet and Allan Drexeller (founders of Grove) also developed a great model for creating and building teams.

Here’s a snippet from their web site…

Teams are more like athletes and artists than buildings, and are in a journey that fluctuates between freedom of aspirations and real-world constraints—seeking a resolution of the two in action. They pass through different stages of engagement and often go back and forth between these stages as the team coalesces. Drexler and Sibbet decided to visualize the Drexler/Sibbet Team Performance Model® as a bouncing ball. It starts with people “up in the air” imagining the purpose and bounces off the “ground” of current realities, regaining freedom of movement through mastery of the constraints.  Read more from their blog site here>

Their 7 stage model also works for new people joining a team. Noting that at any point you can revert back to the previous stage. 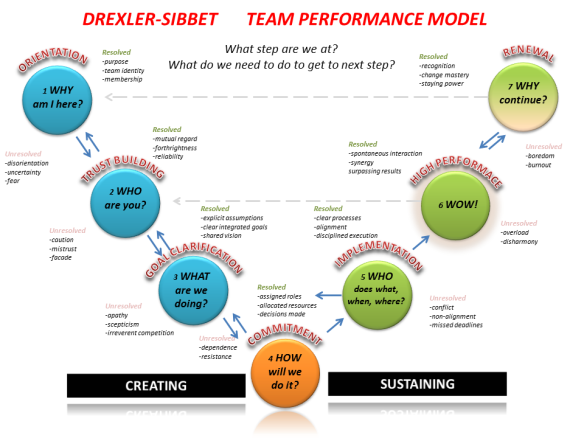